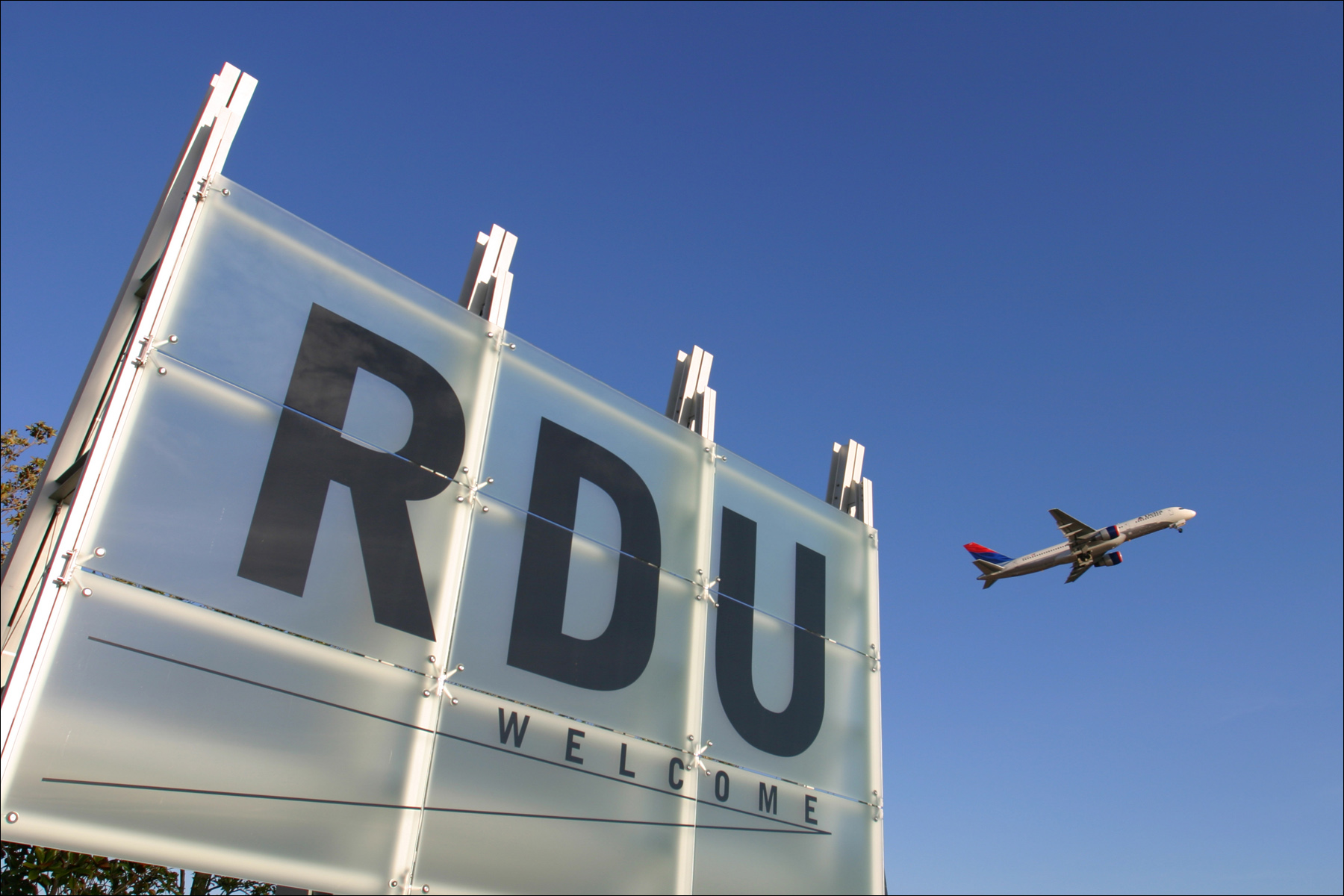 Get to Know RDU Airport: Parking Like a Local, Airlines, and a Cool Observation Park 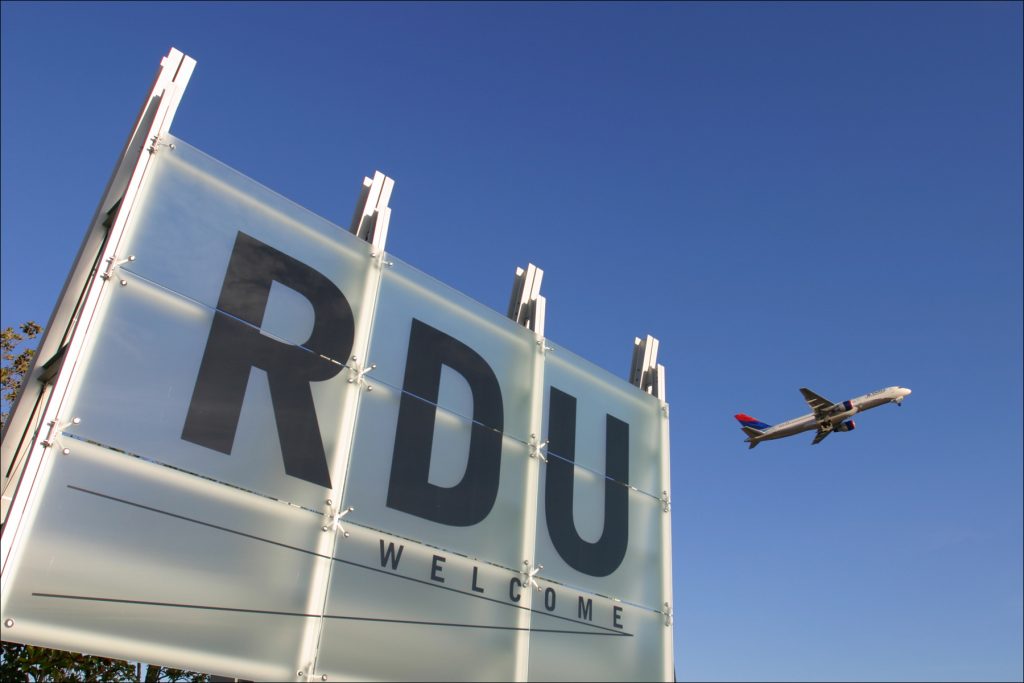 When you’re ready to travel (or show off your new home to visiting friends), you’ll be looking for RDU flights.

Raleigh-Durham International Airport is the main airport for Raleigh, Durham and the Triangle area of North Carolina.

And if you really want to sound like a local, it’s the only time you’ll refer to “Raleigh-Durham” as a place.

Here’s our guide to navigating the Raleigh and Durham airport like a local, from making a parking reservation at RDU (recommended!) to watching the planes take off at the RDU Observation Park.

RDU airport has two terminals: Terminal 1, which opened first in 1955, received a massive transformation from its earlier “blue box” when it reopened in 2014, the News & Observer reported. The first phase of the larger Terminal 2 opened in 2008. 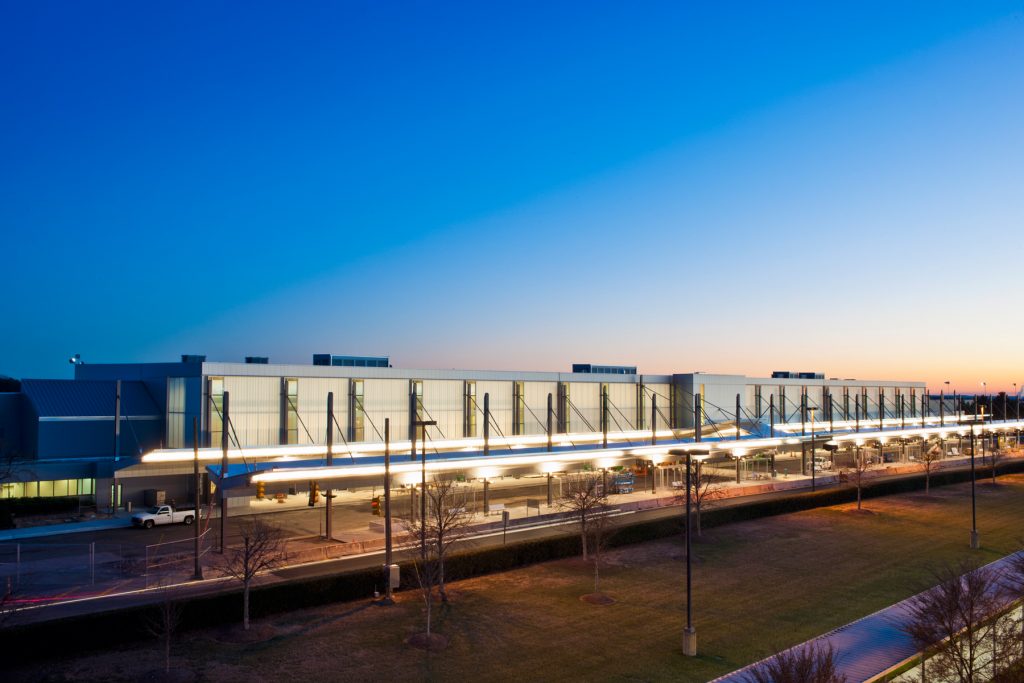 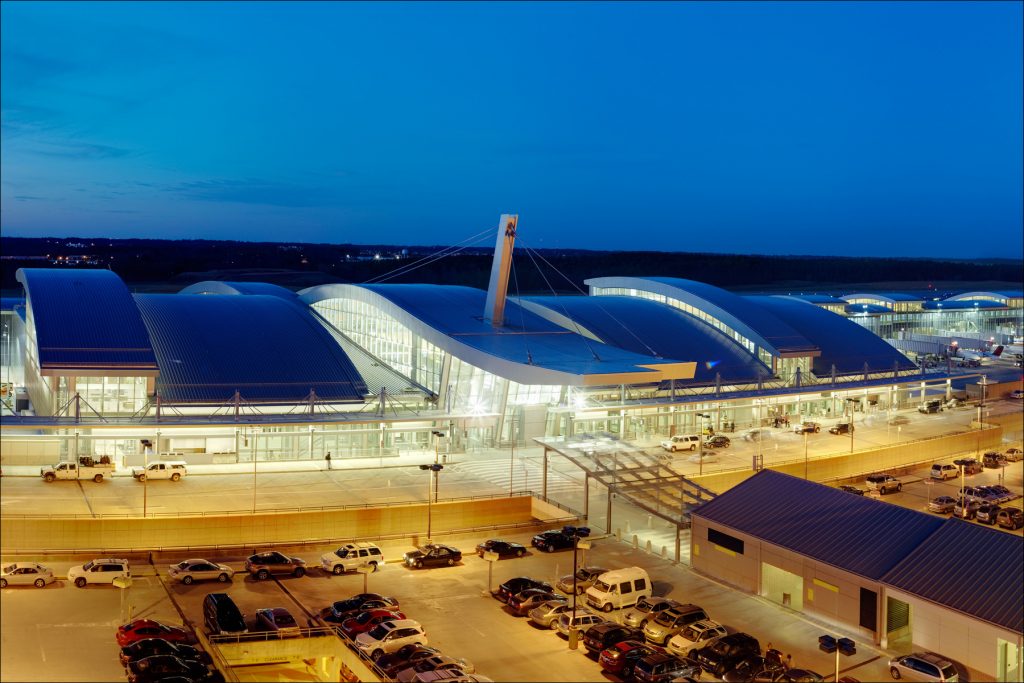 Travelers are returning: The RDU airport served nearly 8.8 million travelers in 2021, and that number is expected to be even higher this year.

For context: RDU’s 2021 total travelers are still only 73% of 2019 levels. The yearly record-breaking traveler growth trajectory is expected to return as travel rebounds, and RDU planners anticipated this with a 2040 Master Plan (more on that below!).

Despite being considered a large airport, the RDU security wait time is among the nation’s shortest. In fact, the Bounce app recently ranked RDU first for shortest wait time, 10 minutes and 6 seconds for average security wait time.

That doesn’t mean you should show up too close to takeoff. RDU officials still recommend arriving two hours before your domestic flight and three hours before your international flight, factoring in more time during busy travel seasons.

That’s especially important when you’re checking a bag! The cutoff time for your bag arriving when you do varies airline by airline, but can be 45 minutes or more. It’s common to see lines to check bags at RDU ticketing, speaking from first-person experience.

RDU security checkpoints at both terminals open at 4 a.m. daily, though the airport itself is open 24 hours.

RDU offers TSA PreCheck and Global Entry options beyond the general security line. And if you don’t yet have TSA PreCheck but want to sign up, there is an office located in Terminal 2, open 8 a.m.-5 p.m. Mondays-Fridays.

If you’re new to North Carolina (or not), a new, more secure identification, called REAL ID, will be required soon to fly. That requirement goes into effect in May 2023. Another option is to use your (active) passport. REAL ID isn’t required to drive.

Before you park at RDU, there are a few things to know. 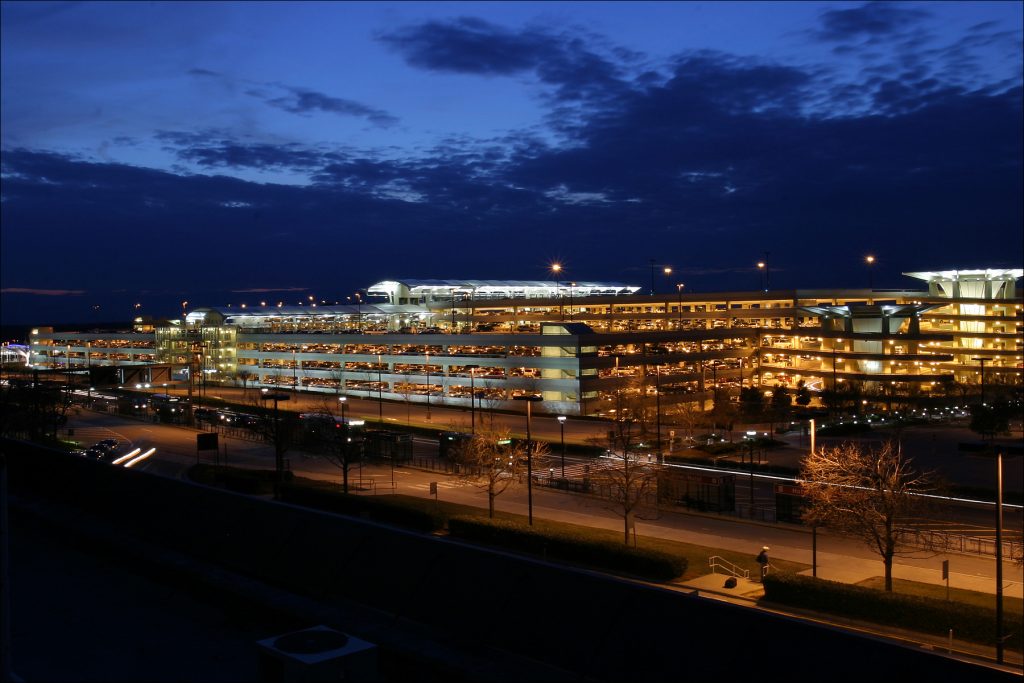 courtesy of the Raleigh-Durham Airport Authority

First, there are different levels and names for parking options at RDU:

Parking rates increased on May 1, the third increase in the last year (the other increases were in May 17, 2021 and Nov. 19, 2021.) There’s reason to think rates could increase again, given the Authority noted in the most recent announcement of parking rates that they’re permitted to charge more.

If you drive up, check the RDU parking site to see which are open or full. A recent Thursday – not before a holiday weekend – showed Economy, Central and Premier all 92-94% full, which is why locals often book parking in advance!

How to make a RDU Parking Reservation: If you book your parking at RDU in advance, you’ll get discounted rates and reassurance that you’ll have a spot. The online system requires at least 24 hours in advance, but you can book it when you book your flight!

A QR code will be emailed to you after you’ve booked. You can print it out or open it on your phone. When you exit, your scanned license plate will register and the gate arm will lift for a touchless experience.

Just picking up visitors? Follow signage to the cell phone lot, which is free to use. Tell those you’re picking up to contact you after they get their luggage as you will not be permitted to wait for them in front of the terminal for very long. 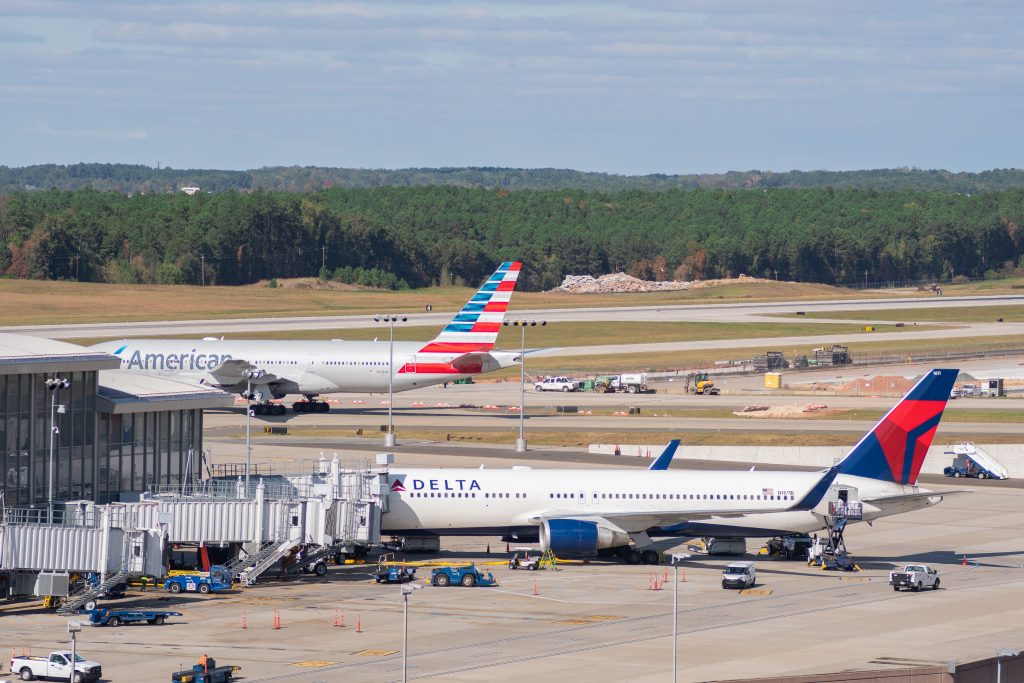 Flights out of RDU: As of May 2022, there are 51 nonstop destinations from RDU, with three international destinations.

Icelandair launched direct flights from RDU to Reykjavik, a popular destination and a connector to Europe in May 2022.

Cancun, Mexico, and Toronto, Canada, are the other nonstop destinations.

Direct flights from RDU to Montréal and London begin in June 2022.

RDU is not a hub for any particular airline, but it is an important airport for one of the United States’ largest airlines, Delta. RDU and AUS (Austin) are now the only two Delta “focus cities” that remain.

Where to eat, drink and shop at RDU

Did you know you can support local businesses while waiting for your flight? New options have opened recently and more are on the way, making RDU eating, drinking and shopping a unique experience.

42nd St. Oyster Bar: It began as a grocery store in 1927 in Downtown Raleigh, but grew to sell fresh oysters and beer. Their RDU outpost opens at 5 a.m. daily until the last departure with fresh seafood, apps, drinks and breakfast for the early risers. Terminal 2, Gate C1.

La Farm: The Cary-based bakery recently opened its newest location at the airport and now serves fresh pastries, all-day breakfast items, Durham-headquartered Counter Culture coffee and a full bar, right on the other side of the security checkpoint of Terminal 2.

Raleigh Brewing: Sip on a locally-brewed beer while you wait for takeoff. We recommend the classic Hell Yes Ma’am Belgian Golden Ale or the award-winning Imperial Oatmeal Stout, The Toll. Terminal 2, Gate D3.

Root & Branch: An option to find something by a local artisan or maker with a North Carolina or Triangle tie, versus that mass-made T-shirt. Terminal 2, Marketplace.

Char-Grill: A Raleigh burger institution that’s grown locally from a cinderblock building on Hillsborough Street in 1959 to nine locations in the area, including RDU. Terminal 1, Gate A5.

Coming soon: While you’re waiting to pick up visitors at the end of 2022, you’ll be able to pick up a coffee or tea from Durham’s Beyu Caffe in both terminals. On the other side of security in Terminal 2, Wake Forest’s Black & White Coffee Roasters will open.

A collaboration with local restaurateur Scott Crawford will bring new concepts to Terminal 2 late 2023, WRAL reports, including a restaurant called Crawford Genuine and a kiosk serving beer, cocktails and snacks. 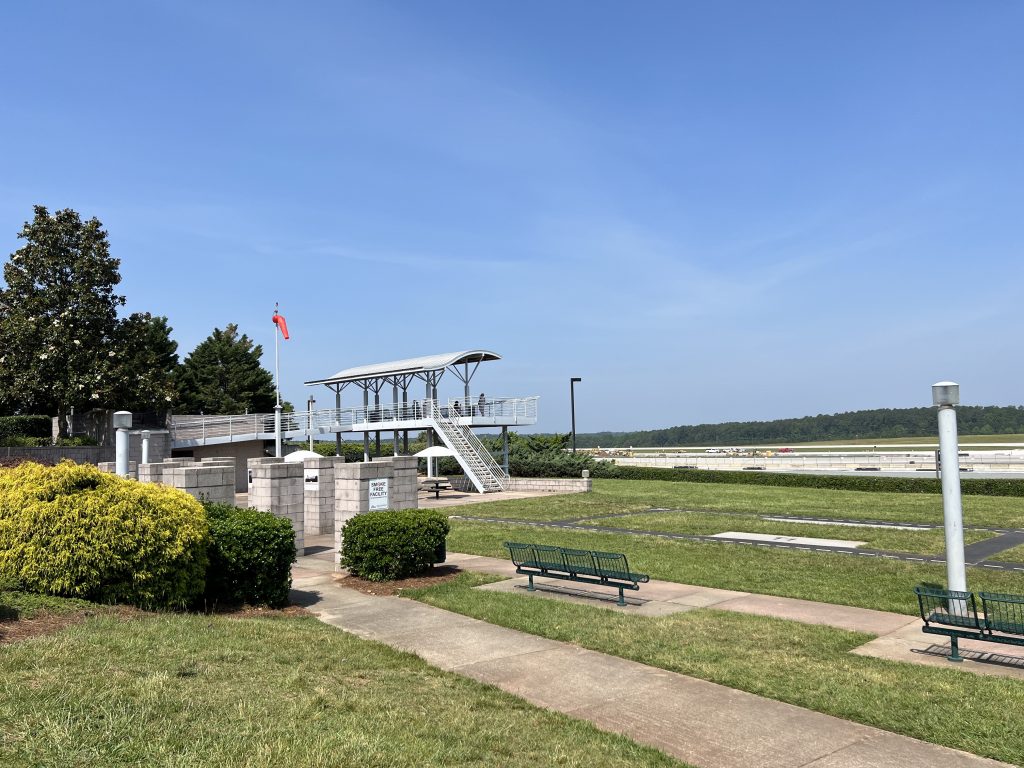 Kids and plane enthusiasts of all ages: The RDU Observation Park is a must-see.

But there’s more to the park than just the deck. It includes a small playground, picnic tables and a child-size “runway” for kids’ imaginative plane play. Your little Dusty Crophopper will love it! 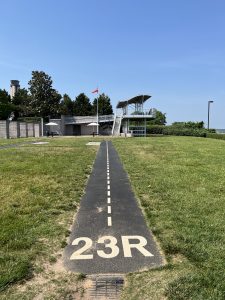 Free parking and bathrooms are available. A ramp on the far edge of the platform from the parking lot is an alternative to using the stairs.

How to find it: The signage for the park is scant, but the park is between the two terminals. The easiest way is to turn onto International Drive from John Brantley Boulevard (the road with the terminals), then turn on Business Street to access the parking lot.

The future of RDU

There’s a lot to appreciate about how accessible the RDU airport is, with its location, growing airlines and direct flight options. But I’ve found the best thing about traveling from RDU is coming home to Raleigh.

Sarah Day Owen Wiskirchen is an independent journalist, content consultant, community builder and Raleigh area enthusiast. You can find her at the RDU Observation Park with her planes-loving preschooler or recommending a La Farm pastry to family members before their flights back to her native Florida.